2022 changes to the building regulations for extensions (Part L)

Building regulations Part L considers the thermal performance of a structure and how to control heat loss from a building. In this article, I examine the new developments that impact both extensions and existing dwellings.

The legal requirements are outlined briefly in a few short paragraphs however these are further expanded in the additional papers called ‘The Approved Documents”. The additional papers include descriptive examples of how to comply with the legislation outlined in the main document and can broadly be considered as the regulations. (There may be occasions when procedures must depart from those in the approved texts, in this case the difference becomes more relevant.)

Part L of building regulations has experienced the most amendments in comparison to other areas such as stair safety design, as heat efficiency has been marked as a clear area for improvement. Prior to this year the changes solely concerned the constructions of new dwellings but most recently the amendments have also affected extensions, which is positive as these changes were greatly needed. The minimum requirements have increased significantly but unfortunately there has been no “consequential improvements” included. 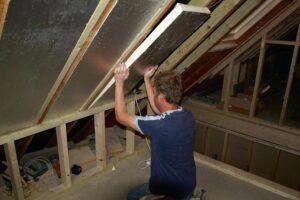 Commercial construction work is already influenced by consequential upgrades, which states that a percentage of the entire budget should be spent upgrading the existing structure, and not just on the extension. On many projects this naturally happens for example through upgrades to boilers, lighting, and insulation, and I think this could have been a useful measure that would upgrade the current housing stock.

The commonly used unit of measurement for heat losses via part of a building’s “an element” is a U-value. It is a way to express heat loss from a particular area of a structure (relevant to the temperature difference). The units used are W/m2K and the lower the value is, the less heat is lost. An older extension wall can have a u-value of 0.28 compared to a normal window’s 1.6 W/m2K, meaning that the window loses far more heat than the wall.

The entire system is just as important, or perhaps more important, in certain circumstances such as new dwellings or those built to higher standards such as PassiveHaus. You can think of it like a warm, thick winter coat that has bad stitching and holes; you lose more heat via the gaps than you do by making the warm parts thicker. Calculating and measuring the entire structure plus the expansion is typically thought to be too complex or burdensome for extension construction since the current building will have too much of an impact. On excellent high standard designs or exemplary projects, the entire home will be taken into account and measured in order to choose the best course of action.

Therefore, on the majority of projects, the expansion is considered to satisfy building rules as long as it completes the minimum criteria. This year these minimum criteria have increased significantly.

The design will also be influenced by the glazing and orientation, since if there is a lot of glass, the insulation levels in the remaining components may need to be even greater to make up for it. (This is reported as an area-weighted figure).

The following values are the before and after values, correct as of July 2022. The values are all measured in W/m²K, and remember, the lower the number the better.

These will affect formerly “normal constructions.” For instance, prior to July 2022, a straightforward brick lean-to extension may have had the following building thicknesses:

In order to attain 0.15W/m2K, the same design would now require 50mm insulation beneath the rafters as opposed to 25mm.

Now, for the same building, a minimum of 90mm of the same insulation would be needed, fitted in a minimum cavity width of 140mm.

There are undoubtedly other ways to meet the requirements, such as switching to an insulated timber frame, using thermal blocks, or completely filling the cavity with insulation (not advised in exposed sites, and generally, TSA does not specify for this reason). However, the period of 300mm overall thickness cavity walls is over. Given that blockwork performs a bit better than brickwork, a rendered blockwork wall that uses a 125mm cavity with 75mm insulation can be considered compliant.

On large sites, the incremental increases of 25–50 mm may appear insignificant, but the industry must pay attention to prevent being surprised by the expenses. (For instance, wall ties will need to be lengthened, and the thickness of insulation, windowsills, and concrete foundations will all need to be increased.)

Want to find out how we can help? Get in touch today Athtech Designs